A Little Known Way To Add Value To Your Strata Property

A Little Known Way To Add Value To Your Strata Property

“Small hinges, swing big doors” is a great expression to describe the renovation we’re covering in this article. We talked to James Burgin, our marketing guru and one of our students, about how he added value to his strata property in Bondi.

James has done a few renovations in his lifetime, including one in Melbourne and another in Phoenix, Arizona, in the USA. He was also involved in our class project in Newcastle. So, he is no stranger to the world of renovating.

He lives in an apartment where he invited Bernadette and Stephen to visit. They encouraged him to redesign the layout because they thought the flow would improve if James moved the kitchen into the living room.

While James has begun with the design, he hasn’t started on the renovation yet. So, we invited him to talk to us because of what he has done outside of his apartment.

Improving The Street Appeal Of Your Apartment Building

When you are living in an apartment, you have very little control over the street appeal of your building. However, the common areas significantly impact the value of your property, and you may have to think outside the square to improve the property’s street appeal.

We once did a renovation project on an art deco property. It looked lovely from the outside, but inside, the hallway was dark, dingy, and smelt bad. So, to increase the street appeal, we mulched all the gardens, scrubbed the hallway, and gave everyone along the hallway a new doormat.

James has taken it to the next level. He took it upon himself to project manage a makeover of the common areas in his building to lift the value of all the properties in the building. And the results speak for themselves. 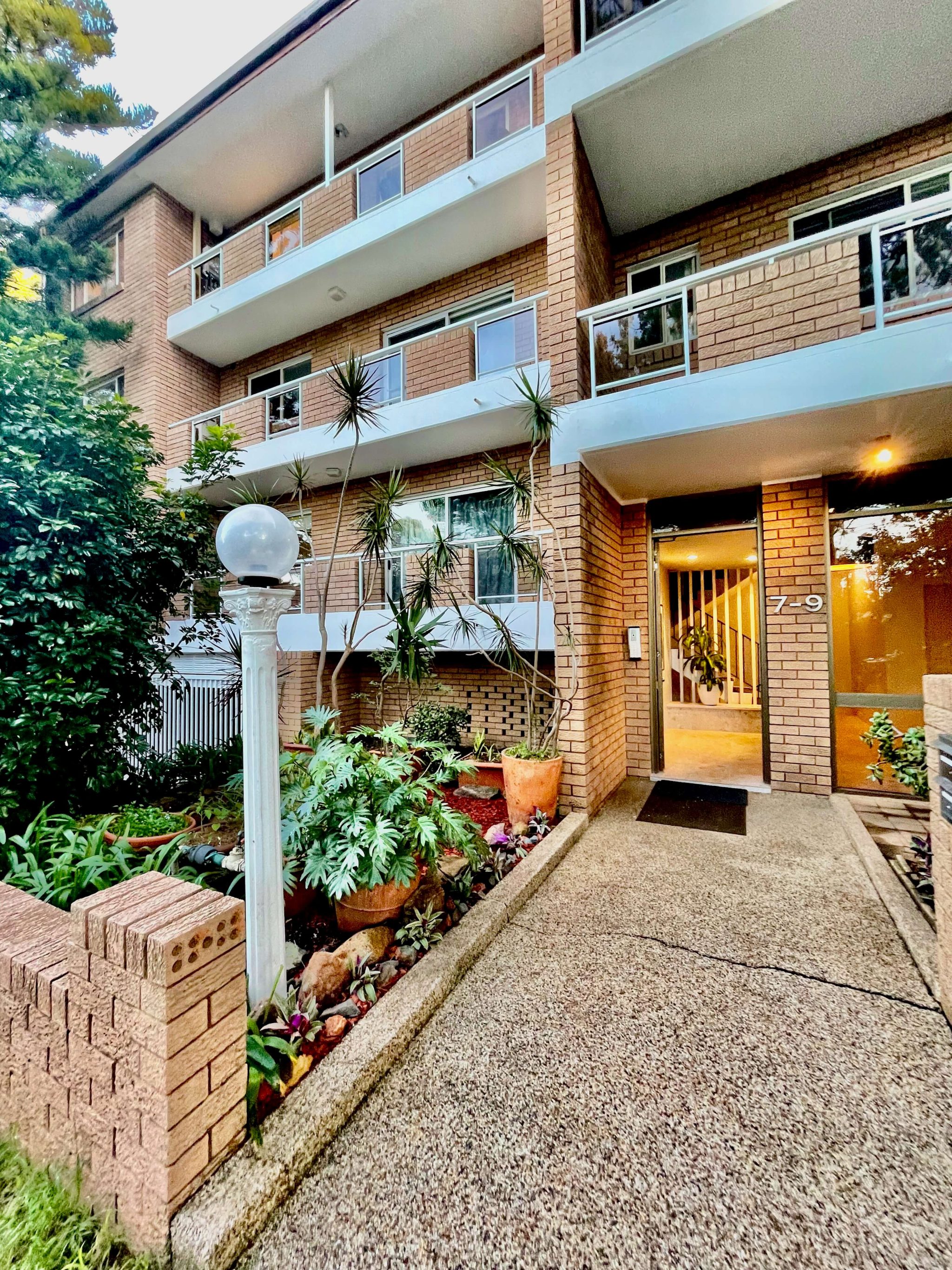 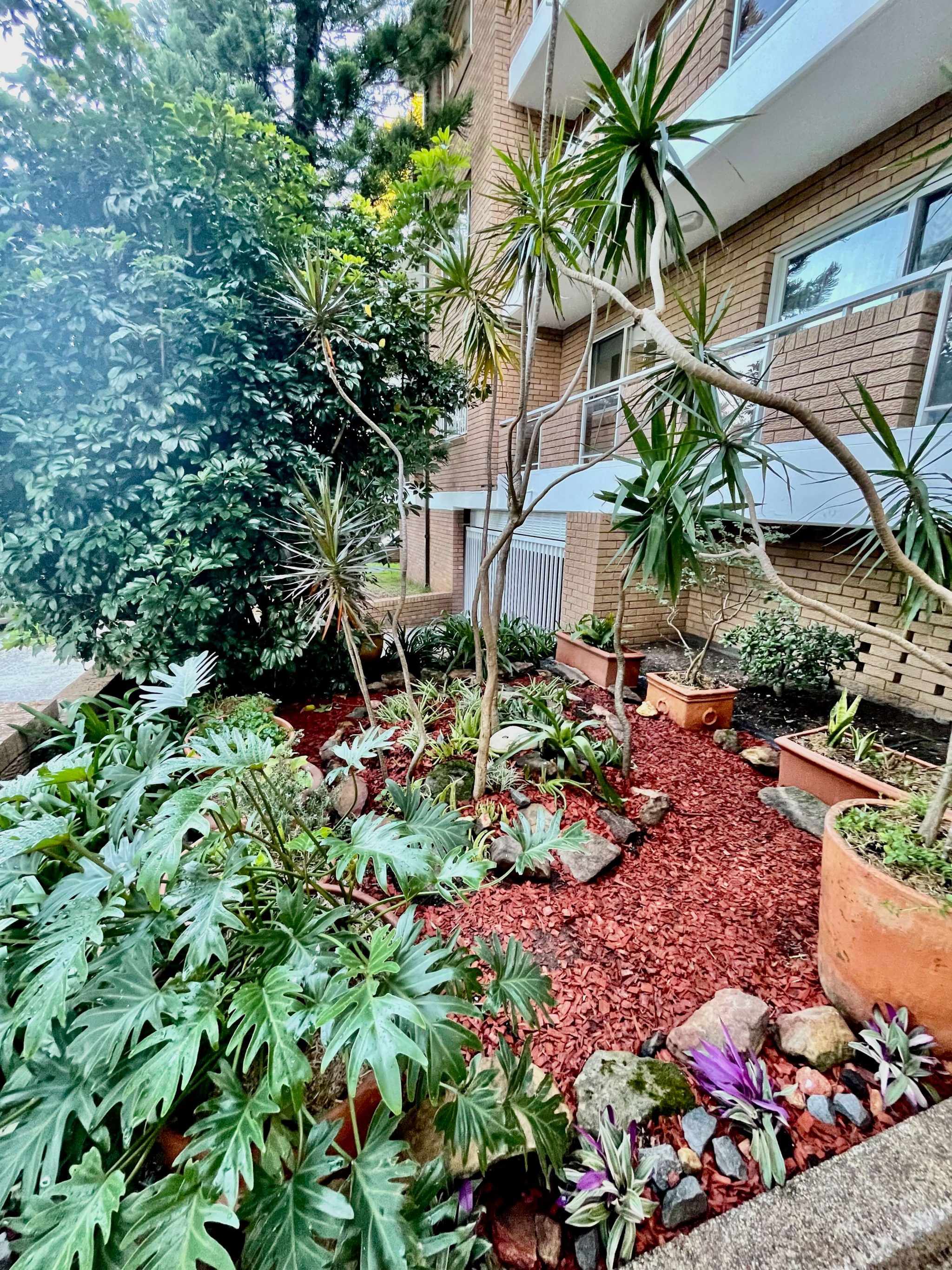 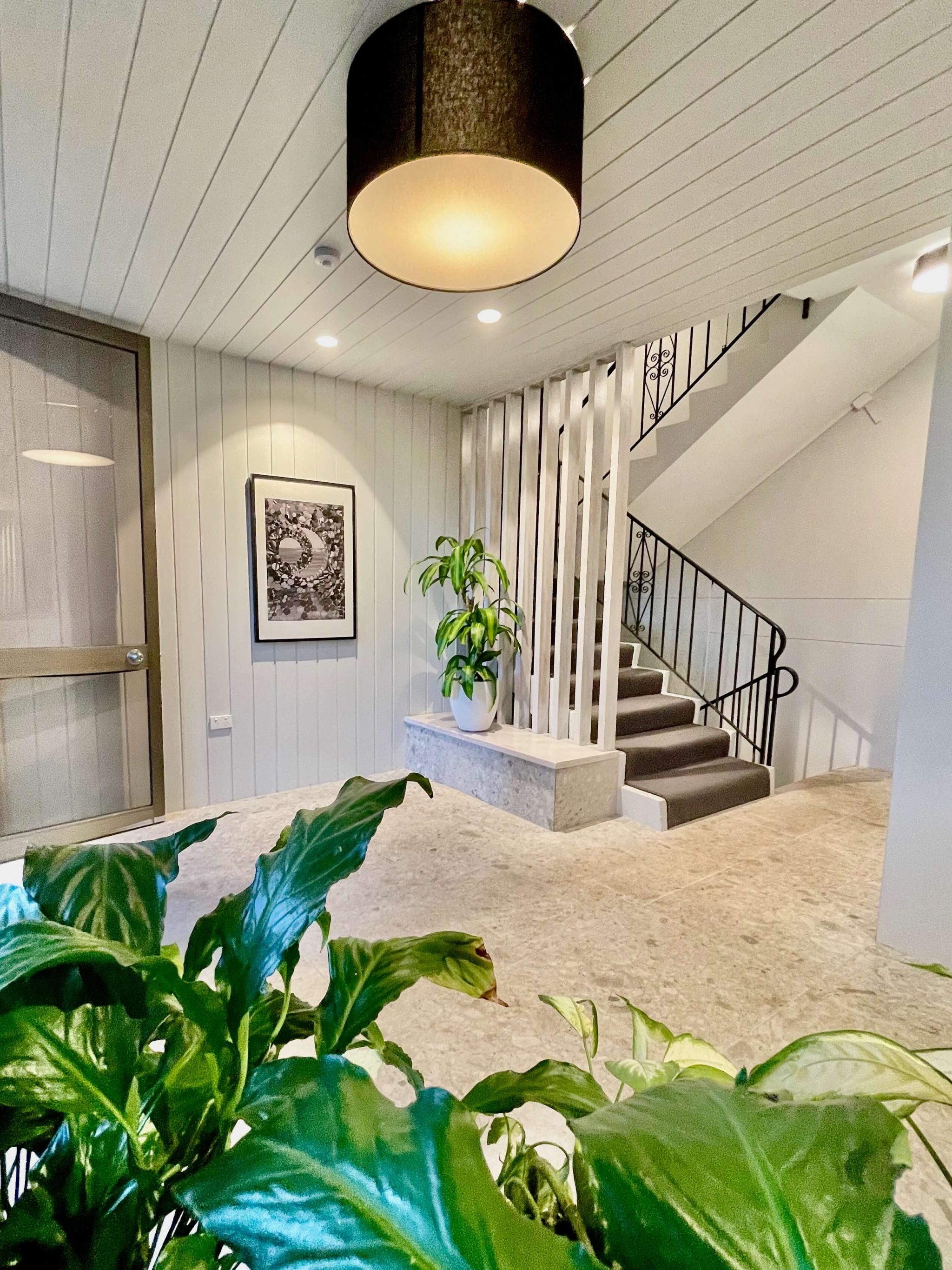 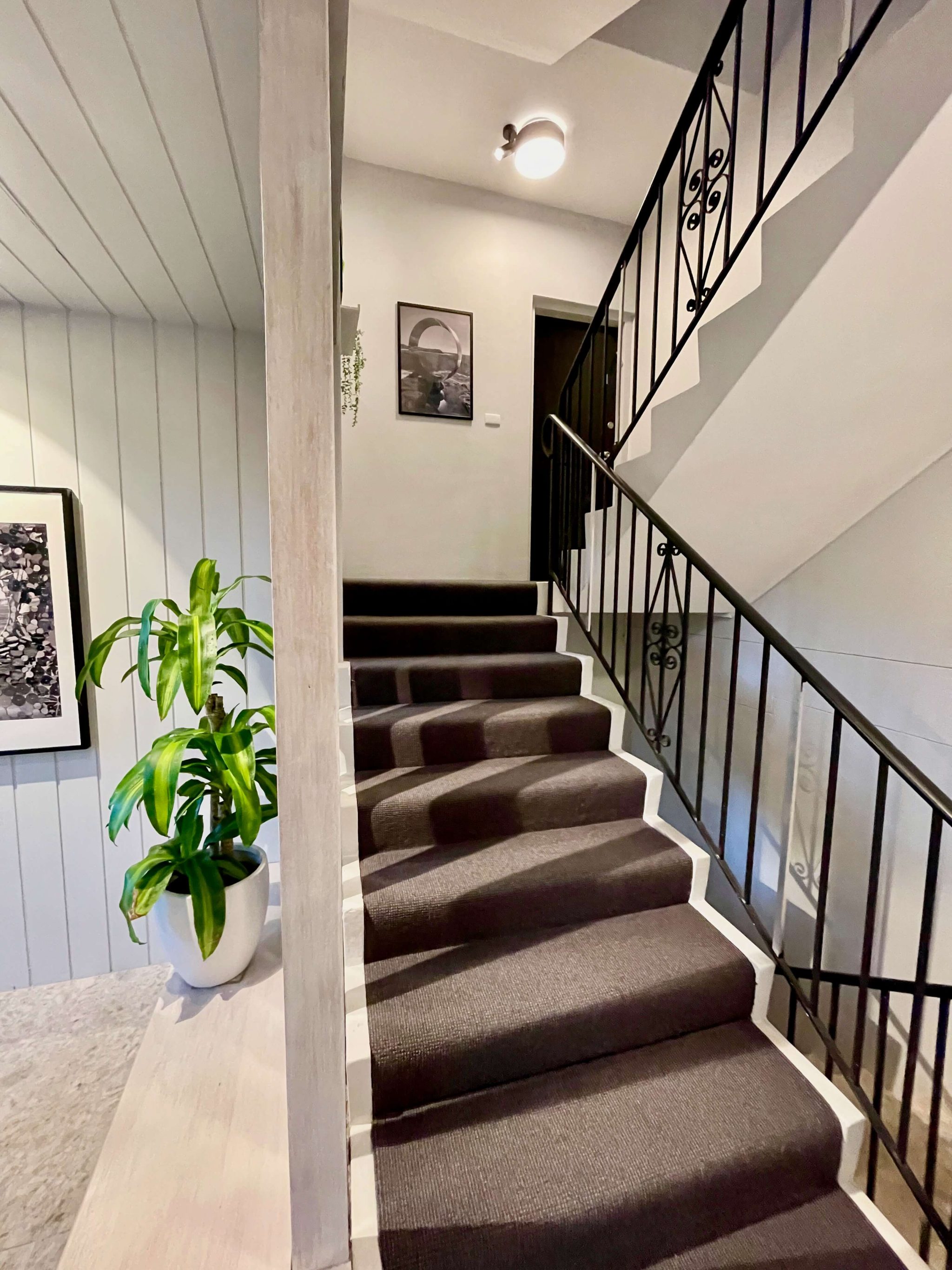 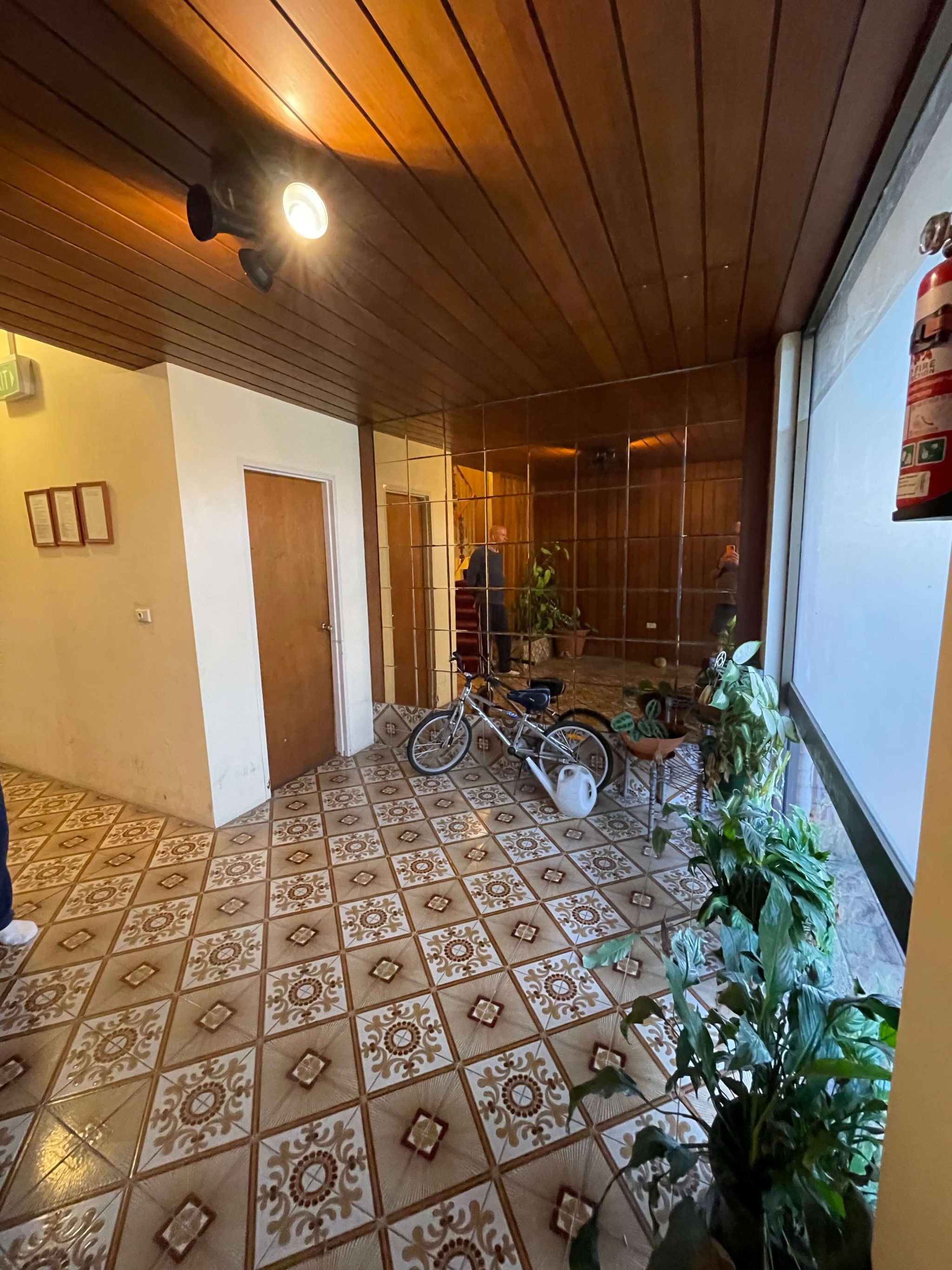 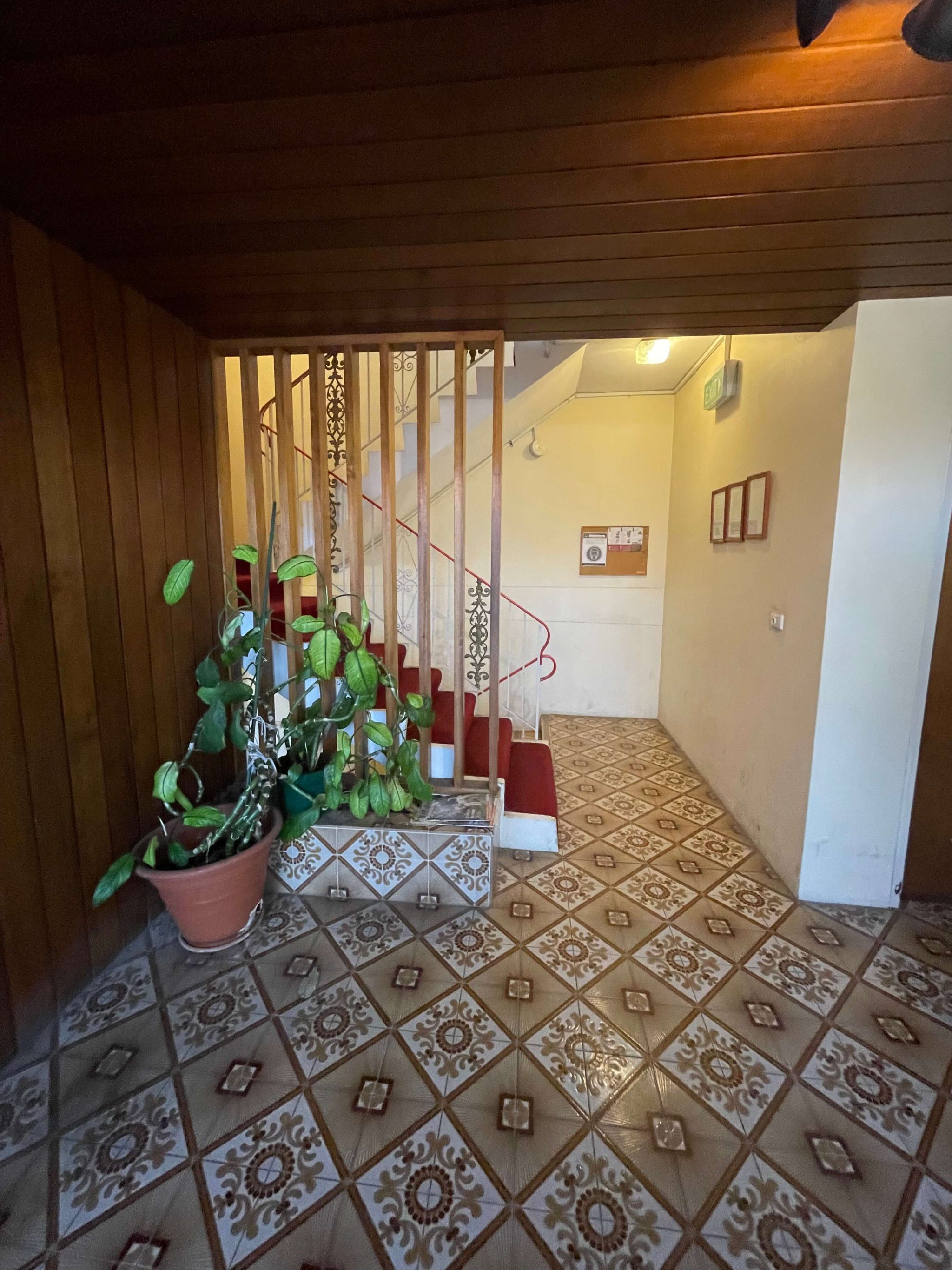 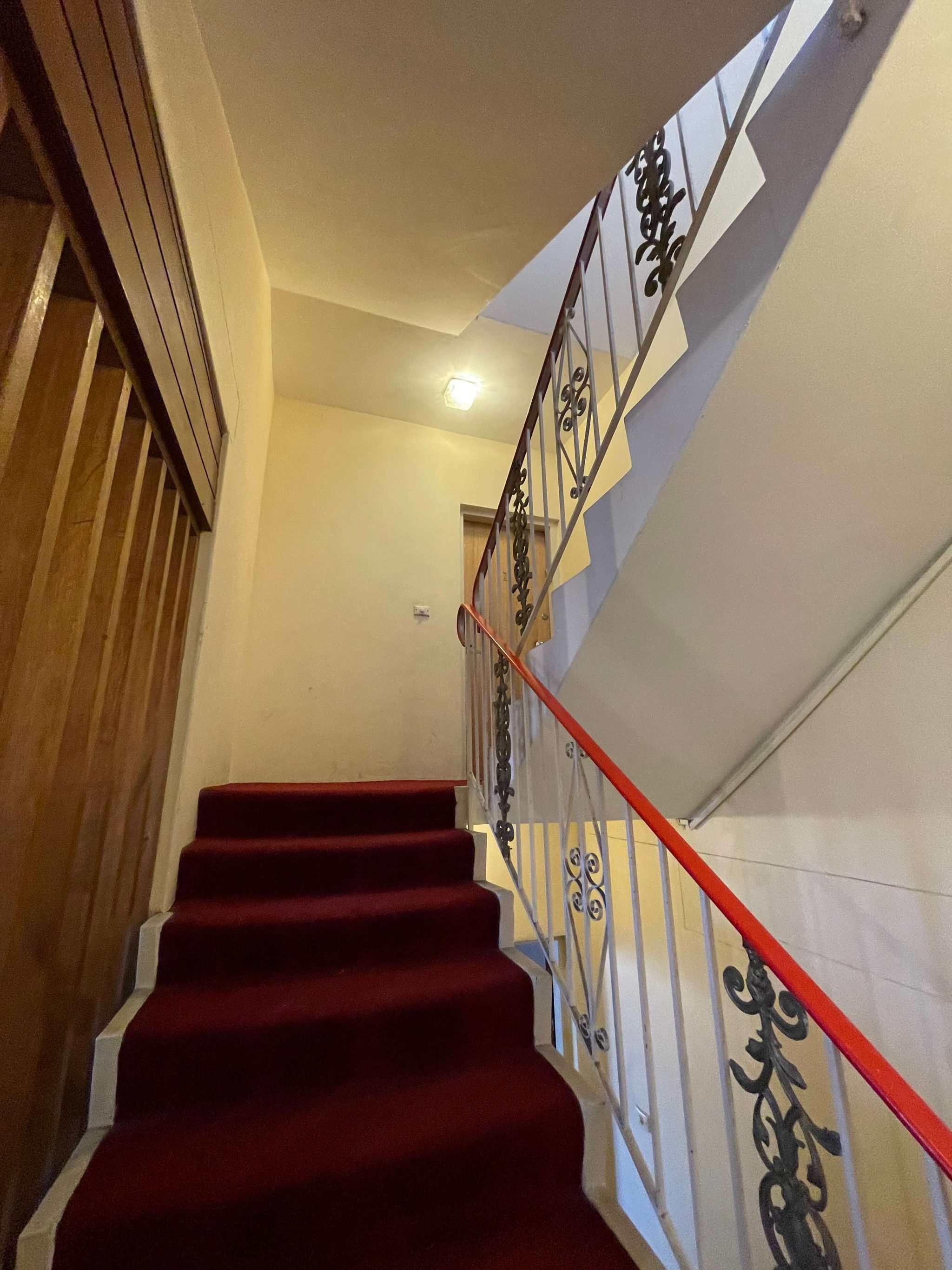 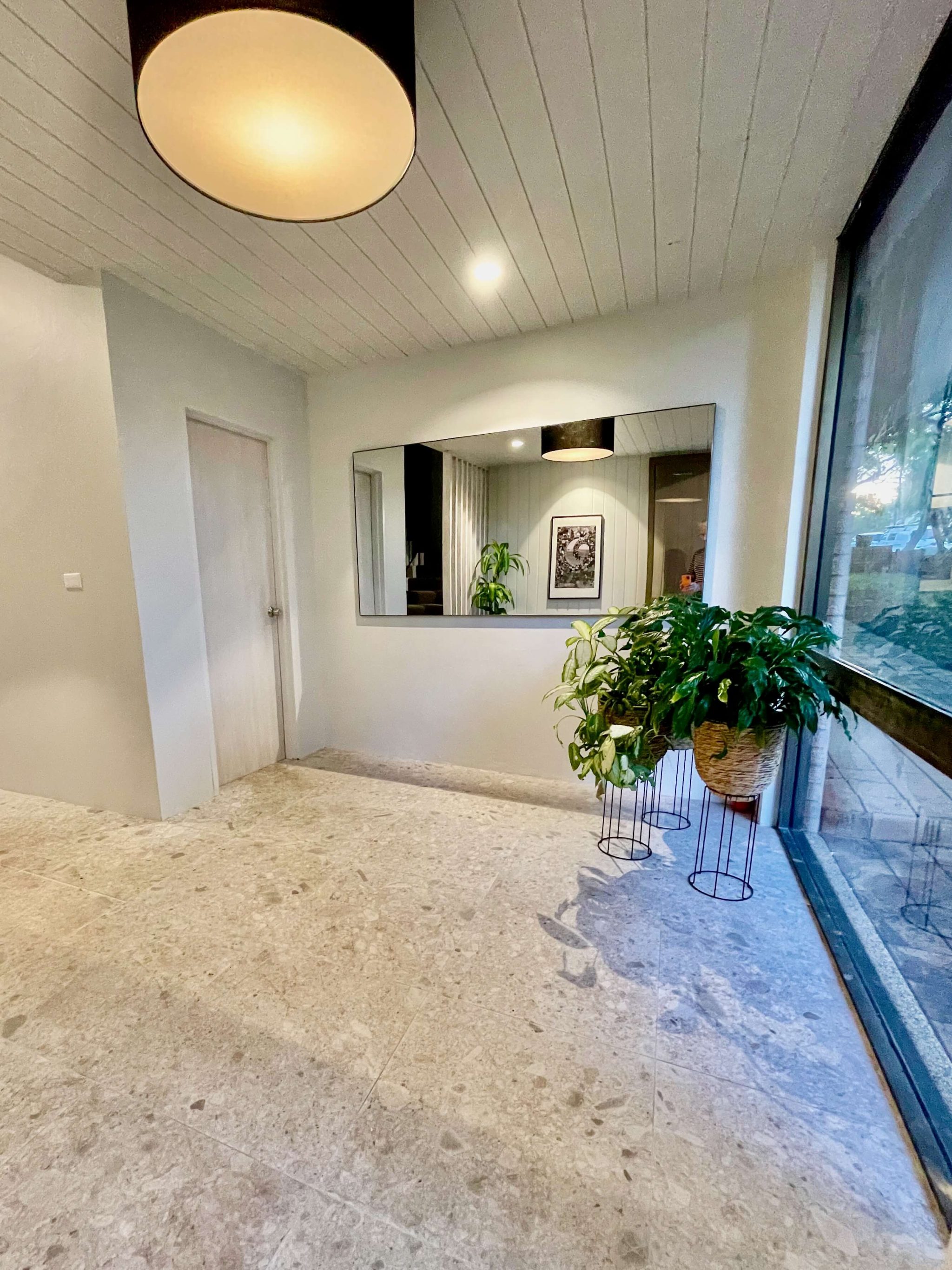 The building was showing its age when James moved in about six years ago. It was solidly built in the 1980s, but James identified some design and maintenance factors that needed attention. For example, the walls needed painting, and the landscaping was dilapidated. In addition, the tiles were all brown and very dull, and a red carpet covered the staircase.

When two owners wanted to sell their units, James saw it as an opportunity for an upgrade. However, being a small building, they have a small body corporate and a tight budget, so they decided to manage it themselves.

James used the templates from The School of Renovating to draw up the scopes of work for the entire property. Then, drawing on his experience with past renovations, he decided to do the project management himself and raised a special levy to cover the cost of the facelift.

Determining The Return On Investment

In any renovating project, you want to know what your return on investment will be. For James, his motivation was freshness and newness and bringing the property up to date. But, he felt that the changes would also increase the value of the properties.

He asked us to recommend a real estate agent who could advise him on how the update would change the value of the properties.

One of your real estate agents said the value increase would be between 5 and 10% for every single unit.”

The agent James consulted knew the building well and told him that the last two units sold went for $1.5 million and $2.2 million for a two-bedroom and four-bedroom unit, respectively. So, a 5% increase in value would add up to an extra $80,000 to $20,000 per unit.

Considering they each contributed $8,500 to the project, they were looking at a pretty big return on investment.

Because there is seldom someone capable of managing a project of this magnitude in strata buildings, they often don’t get the TLC they need. However, it is a significant commitment and should be undertaken by someone who works from home and has time to blend the renovation responsibilities into their life.

It was not a small commitment. James got multiple quotes for the project, which came back at $80 to $90,000 for the painting and landscaping. So, hiring a contractor to do all the work wasn’t feasible. James would have to coordinate the work and the building supplies if they were to stick to the $50,000 budget.

Even though James made every effort to save money to complete the project within their tight budget, they ran out towards the end. So, there was very little left for the landscaping. The solution came from a neighbour who offered to help, and he and James did the mulching and moved plants from the backyard to the front to create a beautiful front garden.

The landscaping brought the owners of the units together. Although, before the project, they were merely acquaintances, through working together, they developed a camaraderie and became friends.

Another aspect of the project that had to be completed with very little money was the lobby styling. They used pot plant stands which James sourced from KMA for $5, instead of large pot plants. And James had taken photographs at Sculpture By The Sea, so he bought the cheapest frames he could find at Ikea, framed the photos, and hung them all the way up the stairwell. James says it is now a joy to come home.

When the common areas of a strata building need maintenance, it is necessary to gather funds for it through a special levy. Everyone in the building must pay a certain amount for the project.

Usually, it works on a sliding scale, with the smaller units paying less and the larger units paying more. In the case of James’ building, everyone agreed to split the renovation cost equally. So, they each paid $8,300 to make up the budget of $50,000. They had pushback from only one party, who ended up being the first to pay.

Trouble-Shooting With Your Strata Building Neighbours

James set up a WhatsApp group to ensure everyone was on the same page. They used it to communicate how the project was progressing and if the work would be interfering with movement in and out of the building. For example, there was a time when no one could walk through the lobby, and they had to go in and out the back way.

As with any group communication, one neighbour would send James lengthy messages, sharing her opinion on the work and whether it was being done correctly. She was particularly vocal about how James chose to retile the lobby.

There are two ways to retile a floor. The first way is to use a jackhammer to remove all the old tiles, screed the floor to make it level, and then tile it. The other way is to simply tile over the existing tiles. James’ neighbour felt strongly that the old tiles must be removed to ensure the height of the first step was still correct.

Instead, James measured all the steps and made a plan to ensure that all of them were of equal height. He also had to adjust the height of one of the steps to the garage. In fact, there were numerous finer details, such as this one he had to take care of during the upgrade.

When managing any renovation, especially in a strata arrangement, you need good emotional intelligence. You will find yourself working with difficult people who must be calmly and firmly managed to keep everyone happy.

How $50,000 Was Used To Upgrade The Common Areas Of James’ Building

We asked James to give us an idea of how he spent the money. Some of the higher costs were:

The rest of the budget was put towards tiling, framed photographs, pot plants, a large mirror, and changing the push time switches to sensors.

The result of the electrical changes in the building was less draw on electricity and a lower bill. However, they could also have considered the grant you can get from the council for installing solar on the building for all the common areas.

Conclusion: Upgrading The Common Areas Can Add Significant Value To Your Strata Property

James Burgin’s renovation project involving the common areas of the strata building he lives in shows how a makeover in these areas can enhance the building’s street appeal and, therefore, the value of your property. For a relatively small price of $8,300 per unit, they have increased the value of each of their properties by 5-10%, which adds up to $80,000 to $200,000.

Just as pleasing is the cooperative community James built through the renovation. His neighbours are no longer simply acquaintances passing each other in the lobby; they are friends working together for the common good. In addition, the upgrade has generated momentum, resulting in further property maintenance and development and boosting each unit’s value.

If you want to meet up with a group of savvy renovators, come over and join the She Renovates Facebook group. It is full of (mostly) women working hard to make their dreams a reality, making a great income through renovating for profit. 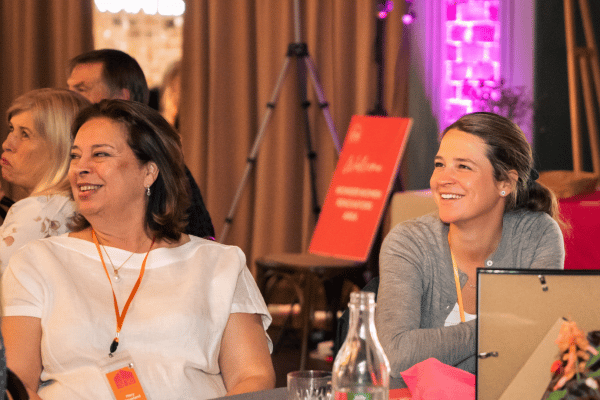 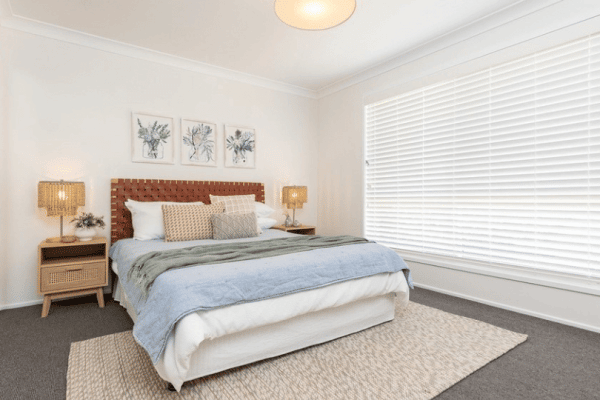 Here are five questions you must consider when determining whether an additional bedroom will help you realise your profit potential. 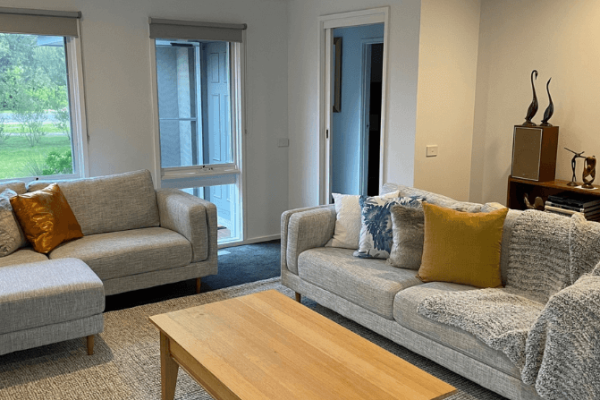 6 Ways To Fund Your Renovation With Bernadette Janson 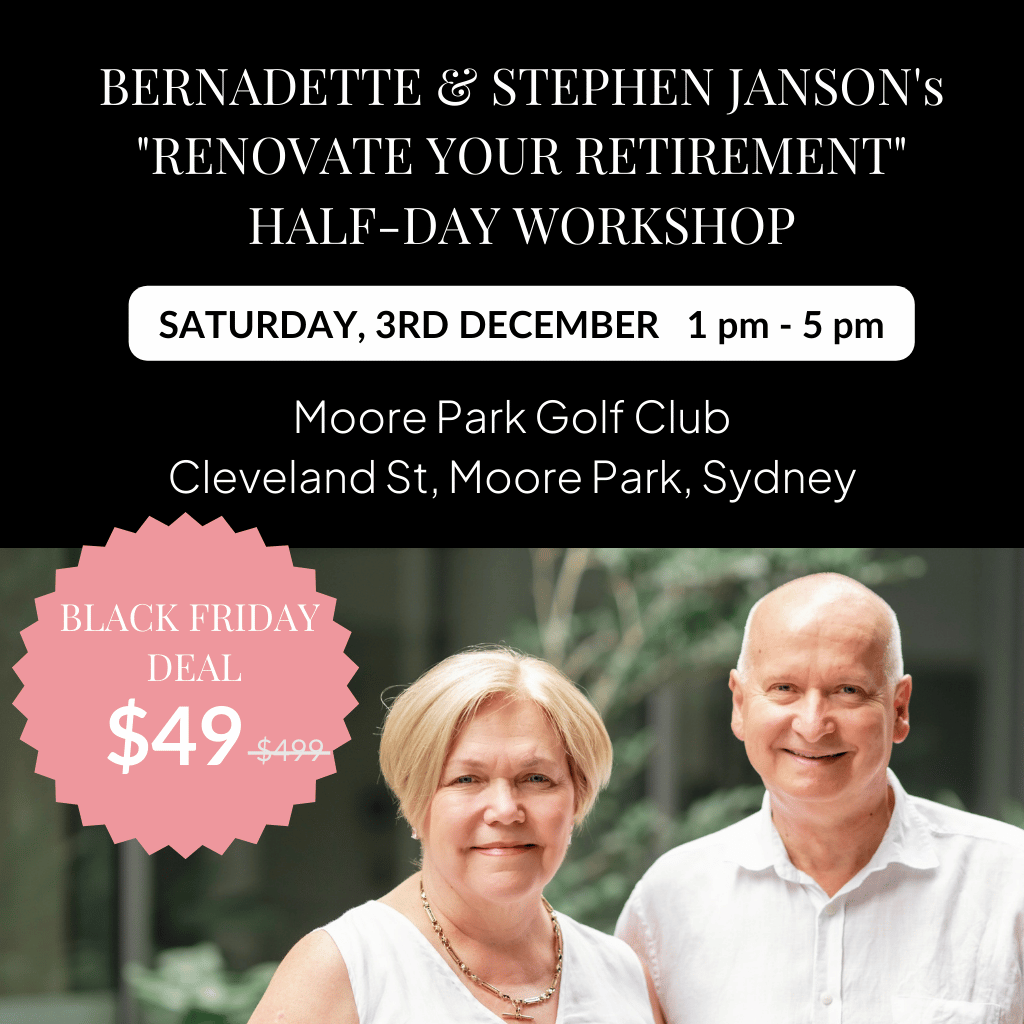 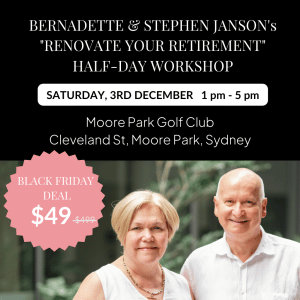